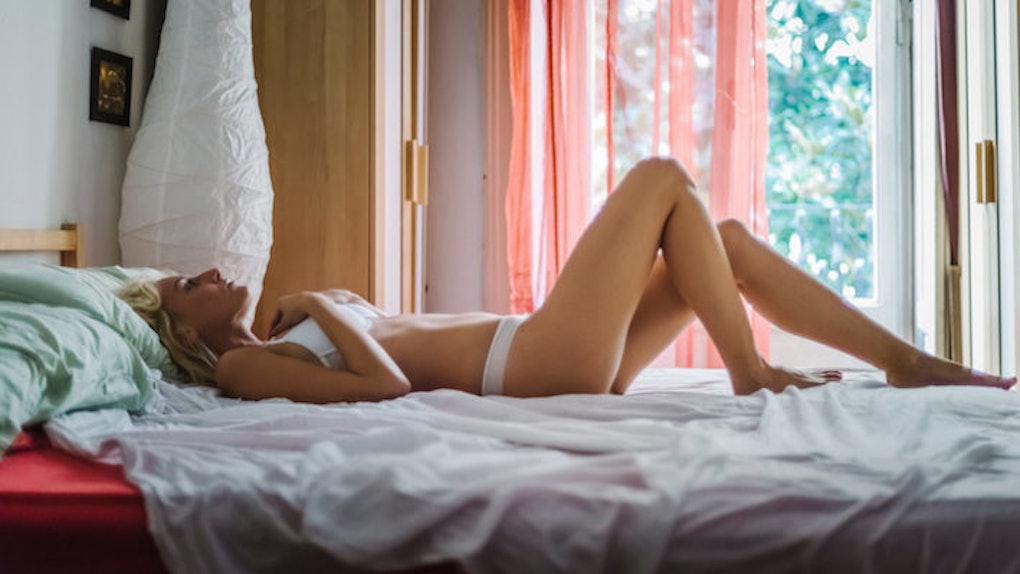 I have yet to experience it, but I would have to be deaf to not hear about the sex lives of my friends, or even random strangers at bars.

I can’t personally assign adjectives to sex when I have yet to have it, but I can think of many adjectives that describe what a sexless life is like (a topic for another time). However, I can assure you that disinterest is not an adjective I’d assign to my sexless lifestyle.

I blamed my lack of a sex life on being career-driven.

While friends of mine would talk about their sexcapades during girls’ night, I would tell them that being focused on my future was why I had nothing to add to the conversation.

And although that was partially true, it was never the underlying reason as to why I’ve remained a virgin at 22.

After many lonely nights mixed with confusion and sexual frustration, one night I finally came to the self-realization that I was afraid to have sex.

Despite having my own needs and being persuaded by the sex-crazed world I live in, I don’t pursue sex because I fear the aftermath of having a sex life.

No, it’s nothing extreme like getting pregnant and dying like Coach Carr warned on "Mean Girls," but more like Becca Moody says in the TV show, "Californication": “Once you get laid, your life basically turns to sh*t.”

With all jokes aside, my emotional fear of having sex has overcome my physical desires. To some, sex is just sex and virginity is just a social construct.

To me, sex ignites all kinds of emotions, the most prevalent and current being fear. There are many fears I associate with losing my virginity.

Surprisingly, none of these fears includes the physical pain that is said to occur with it, but rather, how sex may affect me mentally and emotionally.

Here are the nine fears that are the central driving forces behind my celibacy.

1. I’ll become attached to the guy I lose it to.

This fear is a pretty legitimate one and exactly why I refuse to “just have sex already,” like some of my friends suggest.

This is one of the many reasons I’d feel more comfortable being in a loving and stable relationship when I lose my virginity.

At least with that, my partner and I will both have already developed some level of attachment to one another.

This is my fear that the song "A.D.I.D.A.S" by Korn will come and take over my life. After all, I do have lost time to make up for, right?

No more or no less woman. It’ll be as if it never happened, and nothing has changed within myself or within the relationship of who it occurred with.

Although I’m not expecting to suddenly transition to a different and/or better version of myself, I do think I should feel somewhat different mentally.

I expect to at least have this goofy ass smile of satisfaction on my face after years of sexual frustration have finally been unleashed.

The thought of not feeling anything at all scares me.

4. I’ll feel guilty about the circumstances in which I lost it.

I fear the four W’s will haunt me: who, why, where, when.

As a chronic overthinker, I’d rather be secure in my reasoning of the who and the why, as I’d rather not be tormented by my mind.

5. It won’t be a memorable experience, or what I do remember about it I’ll want to forget.

This is pretty self-explanatory.

I don’t expect to be swept off my feet and taken away to a candlelit room with a bed sprinkled with rose petals, but I also don’t want it to happen in the back of a car.

Ideally, I think it’ll be a special experience as long as it’s with a special person. Maybe he won’t end up being my soul mate, but the thought of not being able to look back at my first time with fond memories seems unfair to myself.

Why not wait for an experience I want to remember, rather than one I wish I could forget?

6. I’ll become less interesting and/or respectable to others.

I know this one is a bit farfetched, but slut-shaming is very real. As a virgin, I’m free from being shamed for being a sexual being.

And, I’m sometimes admired by my counterparts.

Whenever the revelation of being a virgin comes up in conversation, lots of people tend to say things like, “Good for you,” while proceeding to tell me how much they regret their first time.

Guys also tend to have respect for me, as well as a piqued interest.

On top of that, I’ve been a virgin for so long, I’ve grown attached to the silly, yet honorable label often tied to the title.

I’ll miss when sex wasn’t a part of my life and when the possibility of pregnancy scares never existed.

I’ve identified as a virgin for almost 22 years now; once I have sex, I’m worried I’ll miss that part of my identity. I’m afraid I’ll miss how things were less complicated when sex wasn’t involved.

8. I’ll lose my standards for myself and become reckless.

I feel like being a virgin has kept me from making too many of what I consider to be bad decisions.

I have concerns that once I lose it, I’ll go a bit crazy.

9. My expectations won’t be anywhere close to being met.

I feel like I have fairly realistic expectations after being talked down from my friends’ experiences, but the chance of not being at all satisfied with my first experience is a bit daunting to me.

With all these fears being hashed out in writing, I have come to terms with being okay with still being a virgin.

Obviously, some of my fears hold more rationality than others, but they are all fears nonetheless.

And until I can console the majority of these concerns and am with someone who has the power to silence them, it’s safe to say I’m mentally just not ready.

Until certain obligations are fulfilled and the majority of my fears are dismissed, I’ll continue to wear the mental chastity belt I have created for myself.