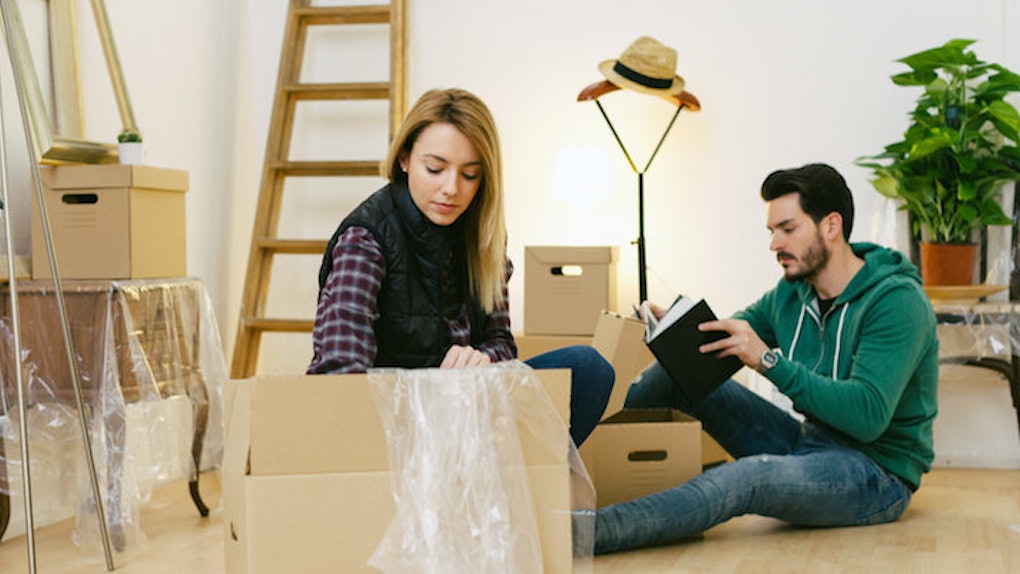 For many of us in relationships, the decision to move in with our significant other is exciting, intense and nerve-wracking, all at the same time.

Whether you've been together for six months or six years, nothing can quite prepare you for what it's like to share a space with someone you love.

For some, it's a smooth transition to live with our significant others, and we naturally adjust to the new adventure and lifestyle change. For others, however, the act of living together at first can be difficult, confusing and stressful.

The good thing is, living together can go from an overwhelming nightmare to a blissful union with just a few compromises.

Whether you and your boyfriend have talked about it casually, or have the moving trucks scheduled for this weekend, there are very essential skills and habits necessary to survive living with a significant other.

One of the most important things to remember when you live with your significant other is that sharing is now a necessity, especially when it comes to food.

For some who grew up with siblings, this trait may come naturally, but for others, this requirement is daunting.

Though it may be frustrating, unless you've added a padlock, wrapped it in duct tape or hidden it in your underwear drawer, any and all snacks are up for grabs.

Though it's difficult to comprehend, now that you live together, you really can't get away with putting him a chokehold for eating your cookie dough ice cream.

In addition to sharing the food, the bandwidth, household chores and TV are also up for grabs, including your beloved Netflix.

Unless you have another electronic device or you're blessed to date someone with the same interest in sitcoms, your days of 'Flix binging may not be as common as they once were.

While initially frustrating that your "Suggestions For You" queue is now filled with sports films and WWII documentaries, now that you're immersed in a world of cohabitation, you'll need to make peace with the fact that you can't binge-watch "Orange is the New Black" as freely as you used to.

Though your cupboards may have been stacked with Ramen Noodles and Chef Boyardee, when you lived alone, you knew how to budget like a boss.

Real, authentic food was something you only experienced when you went back home to your parents' house for dinner, and as long as you had rent covered, you didn't mind letting other things slip through the cracks.

Living with a significant other, however, makes these types of budgeting habits difficult.

When you decide to share a space with your boyfriend, you are essentially making the decision to take a new step in your relationship. Due to this, filling your cupboards with Cup Noodles and Kool Aid will no longer suffice.

Steaks, chicken and pasta will take precedence over the Hamburger Helper you used to consume, and making dinner together like adults each night will start to become the norm.

Though it may be frustrating at first, your stomach will thank you for it later.

Plus, if you can successfully make it out of the grocery store together without an attempt to strangle him with some asparagus, you've already won.

Home decor is all about balance.

Another skill necessary to learn when you share a space is patience, especially when it comes to decorating. If you both lived alone previously, your tastes in apartment or house decoration could very well be drastically different.

While you have special memories linked to your Little Mermaid comforter, he may have a soft spot for his gigantic "BEER IS BAE" sign that he thinks is appropriate to hang over the bed.

Whatever personal tastes you had in your other apartment, you'll need to figure out a way to combine them in a comfortable compromise once you decide on living together.

If you're lucky, your significant other will care less about the style of your place and leave you with the task of spending hours on Pinterest in the hopes of replicating one of their adorable "Couple Apartment" pictures.

If, however, he seems more intrigued by the idea of making a trip to Ikea and decorating together, you'll have to remember to be patient, compromise and leave the hot pink rug with sparkles back in aisle six.

While it's frustrating at first, it actually gives you quite a nice Nicholas Sparks-type feeling to be picking out furniture together.

That is, until you get home from Ikea with your new items and have a battle royal when you try to figure out how the hell you're supposed to put this sh*t together.

Ballin' on a budget and being careless with money is easy when you're not living with your significant other.

As long as you had exact change for your monthly rent payment, saving money wasn't really something you associated with your life too often.

Life is short; why not spend now and regret later?

Sure, you may have spent a week rationing a container of leftover Thai food because you ran out of cash, but those were all just learning experiences you looked back on them as fond memories.

When you live with your significant other, however, it's a different story.

Whether you have a joint account or simply vow to save money together, combining the cash from your respective paychecks and putting them toward bills becomes a balancing act.

Though, eventually, paying bills and building a savings account together will be like second nature, there can be various frustrations when it comes to things you decide to pay for together, especially when the funds run low.

While it may seem overzealous to sort out a budget based equally on your salaries before signing the lease, it's never fun getting into an argument over spending habits when the rent and the utilities are all overdue.

Being on the same page when it comes to money, and making sure your bills are paid before you go on a spontaneous shoe-shopping spree will prove to make things easier on both of your bank accounts — and your boyfriend’s sanity.

Man Cave vs. Women's Den: How to comprise...

Sometimes, you just get the urge to throw on some sweatpants, order in some Thai food and invite your girlfriends over for a night of sappy movies, gossip and wine.

Before you moved in with your boyfriend, this was easy, despite the fact your apartment was the size of a shoebox. When you live together, however, it's a tad more difficult.

Usually, "girls' night in" would send fear through the heart of your boyfriend and send him running to the nearest sports bar.

But, sometimes the option of fleeing the scene just isn't available, and he's left playing PlayStation in the other room while trying to avoid your night of facials, Instagram stalking and wine-induced confessions with your friends.

While you love these fun, carefree nights in with your besties, and the fact that your boyfriend made himself scarce, rolled with the punches and dealt with the hysterical crying he heard from the other room (it's just not wine night unless someone cries), don't forget he, too, should have his opportunity to host a night in with his guy friends.

While cohabitation with your boyfriend can be difficult, frustrating and exhausting at times, you also have been presented with a great opportunity to build your relationship and, essentially, a life together.

As you learn more about one another, you'll find yourself becoming stronger, working together and reaffirming your love for each other.

In all honesty, sometimes, there's nothing better than a night in with your boyfriend in the place you both share, relaxing on the couch and watching a Netflix series that only took you 30 minutes to agree upon.

Plus, once you've settled into a routine, it's pretty much like living with a best friend who occasionally farts in his sleep and leaves the toilet seat up.

As long as you're willing to compromise, forgive and make new memories, the time spent living together will make your relationship stronger than ever.

Just make sure next time you buy some cookie dough ice cream, you double your purchase so he doesn't eat yours. Otherwise, heads will roll.