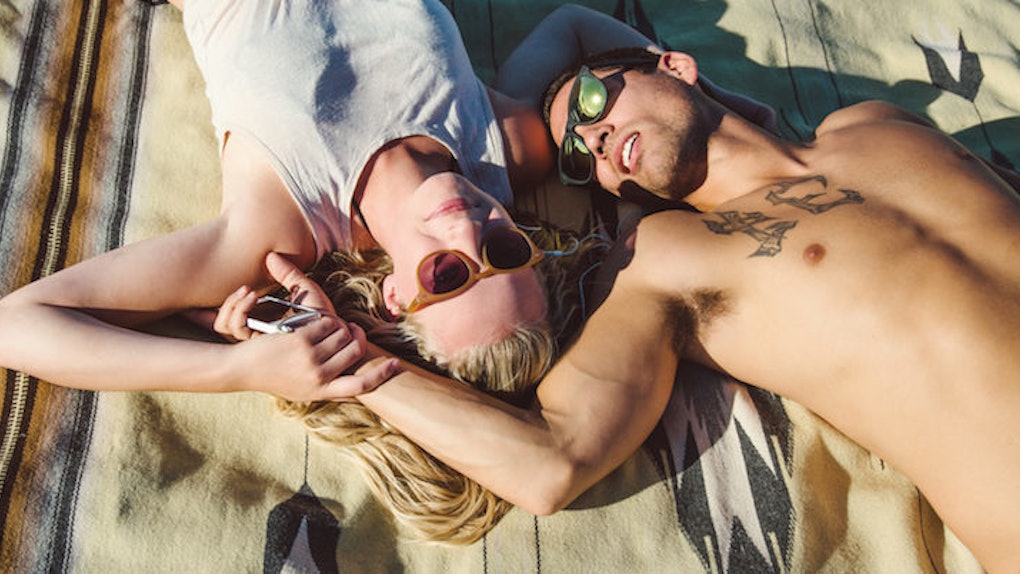 It's About Trust: 20 Things Strong Couples Do Differently

Being part of a unit can be difficult. You make decisions with someone else in mind. You have to be careful of another person's feelings. And you need to be conscious of also making yourself happy.

So when we finally find that significant other who makes this all seem easy, we know we possess the foundation for something good to grow.

Strong couples are, first and foremost, strong individuals. They are secure with themselves and, therefore, can allow themselves to be vulnerable in a relationship. Once you have that special kind of acceptance from the other person, your strength is reinforced.

Solid relationships are dependent on two people's understanding and appreciation of each other. It's falling in love with the person who makes you smarter, better, faster, stronger... and then taking on the world together.

Here are the 20 things that strong couples would never do.

1. They avoid deliberately try to make the other person jealous

When you're in a solid relationship in which you receive enough attention and care, you don't feel the need to additionally seek it out through low-level tactics.

2. They don't go through each other's phones

Having the urge to raid your partner's cell phone signals to your partner that you don't trust him or her. Once you start prying into each other's phones, all honesty goes out the window and every text is grounds for an argument.

Don't say through text what you wouldn't feel comfortable saying aloud and you won't find yourself apologizing later.

3. They aren't complacent in the relationship

Even the strongest of couples understand that relationships take work. They aren't all holding-hands-and-kissing-in-the-moonlight dreams that we have when we're single.

Strong couples put forth an effort every day. They are grateful for the other person, make room for growth, and say “I love you” and mean it.

4. They don't compare the relationship to their previous ones

When we compare two things, there will always be a winner and a loser. Every relationship is different, and what makes one special might not hold true for another.

It's possible to have more than one successful relationship in your life. Strong couples focus on the relationships they're in, not the ones they've moved on from.

If you actually put that much emphasis on social media to validate your relationship status, you probably aren't mature enough to be in a real one.

6. They don't insist on being with each other all the time

Secure couples don't need to be with one another 24/7. In fact, they don't want to be together all the time. They know it's important to still maintain their independence and outside interests.

That means seeing the chick flick with your girlfriends or attending spin class by yourself. Your partner wants to enjoy his/her own life, and for you to do the same.

7. They avoid picking on each other's flaws

We all have improving to do. When the playful jest turns into annoyed jabs, it's symptomatic of a larger struggle between partners.

Strong couples know the other person's weaknesses, and rather than putting their partners down for it, they don't mind stepping in for support.

He might be horrible at keeping surprises and you might suck at organizing your schedule -- but you two make it work because you've got each other to lean on.

8. They aren't trying to the make the other person something he or she is not

You fell in love with each other for a reason, not for a project. Stable couples don't try to alter the other person's appearance, or make her edgier or him less talkative.

Happy partners are in love with the real people in front of them.

9. They would never compete with each other

There's a difference between challenging your partner and competing with your partner. In the former, both of you emerge as better people; in the latter, someone has to lose.

It's not about who bought dinner one night or who thought of the restaurant. It's about selflessly making each other happy and getting there together.

Restrictions are the anti-growth for relationships. So-called "rules" that prohibit each other from doing certain things will only spawn resentment.

We know you'd rather not watch us parade around in short-shorts in the same way we'd rather not hear that you're grabbing coffee with your ex, but we're secure enough not to hold each other back.

You're a strong couple because you built each other's strength and got there together. That means always being honest with each other, even if it's not what you want to hear.

Sometimes, I really don't want to acknowledge the fact that I will always be the messier person in the relationship. And then all of my dirty clothes are magically piled on top of the bed and I know what I need to do.

12. They never insult their partner's family

13. They aren't always wondering where the other person is

Strong couples don't need constant contact. They aren't consumed with what the other person is doing or distrusting of his or her whereabouts.

There needs to be a balance between thinking of yourself and thinking with someone else in mind.

For instance, the times I'm thinking of my significant other include supermarket shopping, on the gun range and kick-boxing, while I tend to dream about Beyoncé alone.

14. They don't get drunk to like each other more

You can actually enjoy another person totally sober. Revolutionary, we know.

15. They don't hang out with only each other

Just because you spend every second together doesn't mean you have a solid relationship. The ability to separate from one another actually makes your ties stronger.

Nobody enjoys that couple that can't be without the other person. It's too much. It feels disingenuine. It's just as important to keep your outside relationships as it is to maintain your romantic ones.

The sexual component of relationships holds equal weight with the emotional stuff, too.

It should be hard to resist your partner, and even more unbearable to get on without him or her. Quality time is the best time.

17. They would never publicly put the other person down

Humiliating your partner -- especially in front of other people on purpose -- is grounds for breaking up. There's a way to express yourself, and there's a way to, well, not.

The only time it's ever cool to embarrass your significant other is by farting loudly in an otherwise silent space. True story.

18. They don't judge the relationship against other couple's

There is no one way to love somebody. When you compare what you have with someone else's standard, there will always be instances you come up short.

Strong couples are strong because they don't base their value on how they measure up to the outside world. They focus on themselves and know that they are good.

19. They won't get mad without explaining why

We know from grade school drama that addressing situations passive-aggressively never works the way we want it to. Successful couples are able to speak up and not be afraid of how the other person will react.

Harboring anger without giving your partner a chance to make it right isn't fair to anyone.

Even if you're not physically together, you're together in your hearts.