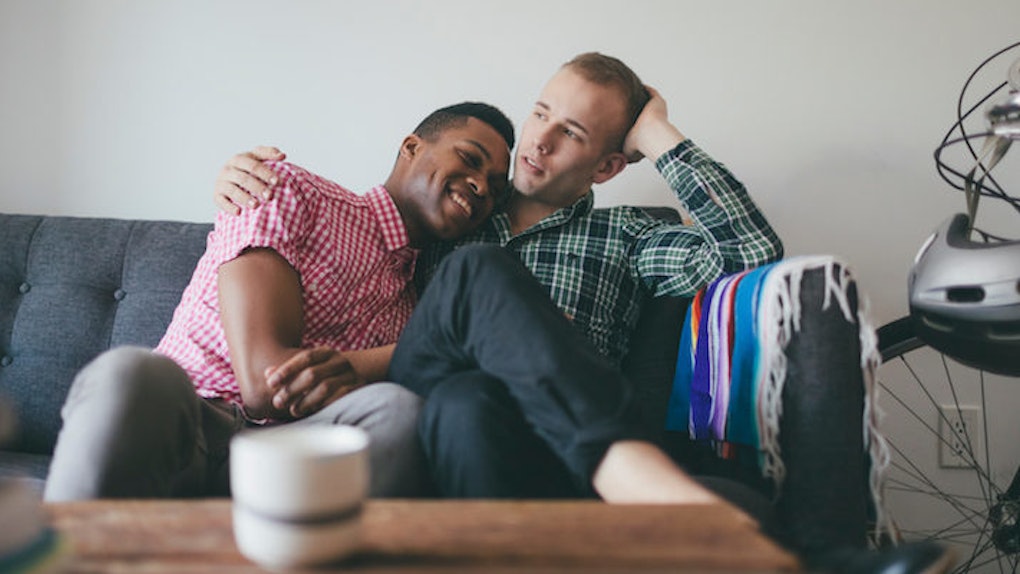 Dating in the gay world is hard, and I mean that quite literally. Sometimes it feels like you are banging your head onto a solid brick wall.

As a homosexual looking for love (not the kind of love you will find in a cubical toilet), you will come across a barrage of dead ends and disappointments.

You will be judged, you will be ridiculed and you will have your heart stomped on just because you dared to be different and follow your heart rather than your throbbing penis.

While searching for “the one,” you will come across many who are not "the one." In fact, you usually come across "the one" you will never want to see or even remember again.

Here are the 10 types of guys you will most certainly come across in the dating scene:

Don't get too attached to a slut, in fact don't even converse with one, remember, you are looking for love, not an STD.

Yes, he is very tall, yes he walks like a man -- a real man -- and yes he is every inch the ultimate masculine form and has no limp wrists or sassy "sista" mannerisms in sight, but he is not boyfriend material and you deserve so much better.

This relationship is bad for your self-esteem and has no real future, unless you're comfortable with being known as a dirty secret for the rest of your life.

You think everything went really well on that amazing and out of this world first date. Conversation was stimulating, he was attractive, you had an incredible and passionate kissing session and he even paid for the meal and drinks at the end of the date. But a few days pass and nothing.

You check in for a sign of life and silence prevails. You resign yourself to the fact that he has vanished and magically disappeared from your life, leaving a gaping void in your heart and a million unanswered questions.

You have been "ghosted," and all you want to do now is call the Ghostbusters.

4. The full of excuses guy.

This guy always seems to have something better to do than commit to a date. You may have something down on the books and then the day of, he's come down with tonsillitis and got run over by a car.

This is the full of excuses guy, and quite frankly, any excuse not to see him again is a good excuse. Fool me once, shame on you. Fool me twice, shame on me.

His profile clearly stated he was 5 ft 10, so why am I now looking down at you? Not only is he a liar, but this is just completely awkward because I was 100 percent expecting someone else.

He has a beard, he is wearing skinny jeans and he a flannel shirt. He is also a righteous and pretentious freedom fighter, and an activist who walks down the street chanting ''EU we love you'' while holding a homemade and illiterate sign that says "Migrants are welcome here."

I take one step to the right and disappear out of sight.

You hear his high pitched screech before you even see him, then you see him prancing down the street toward you and you just want to quickly die.

He plays up to every outdated and generalized gay stereotype, bitchy, overly feminine, loves Beyoncé and can recite every scene from "RuPaul's Drag Race."

He lives and breathes the gay scene, and can be found practicably on cue at G-A-Y Bar on a Saturday with his bunch of "sistas" twerking to Rhianna while wearing denim shorts and a tight vest.

He speaks with broken English and is constantly very happy with a huge smile plastered on his face. Quite frankly, he's too happy for my cynical British self to handle.

He has a lot of fellow European friends and they all talk in their own native language while I am just sat there looking blankly into thin air not understanding a single word.

Nice enough guy, but too much of a cultural difference to form anything significant. Plus I voted to leave the EU, so deep down he secretly despises me.

9. The older guy trying to be young.

You see this 40-something balding creature in the middle of the dance floor looking like a sweating octopus as he tries to dance to the latest Justin Bieber dance number.

Living vicariously through the 20-somethings he surrounds himself with, you can almost see him trying to suck the youth out of those around him like a leech. Go home, put your feet up on the sofa, have a cuppa and switch on "Coronation Street."

And last but not least, the hopeless romantic guy.

He's a rare find in the gay scene. This is someone who actually values and seeks love, not the open relationship/Grindr kind, but the traditional and monogamous kind of love, perish the thought.

Some people call them obsessive; I like to think of them as efficient and knowing exactly what they want. This is a guy who, after a couple of dates, wants to call you their boyfriend. To be honest, there is nothing wrong with that; he wants commitment and is not afraid to put his heart on the line.

They are loving and honest and deserve someone who can love them equally the same. If you cannot return their affection, you do not deserve someone as special as this in your life. Only fellow unconditional romantics needs apply, this one is a special catch.

Disclaimer: This article reflects the view of the author, and does not reflect the official position of Elite Daily.