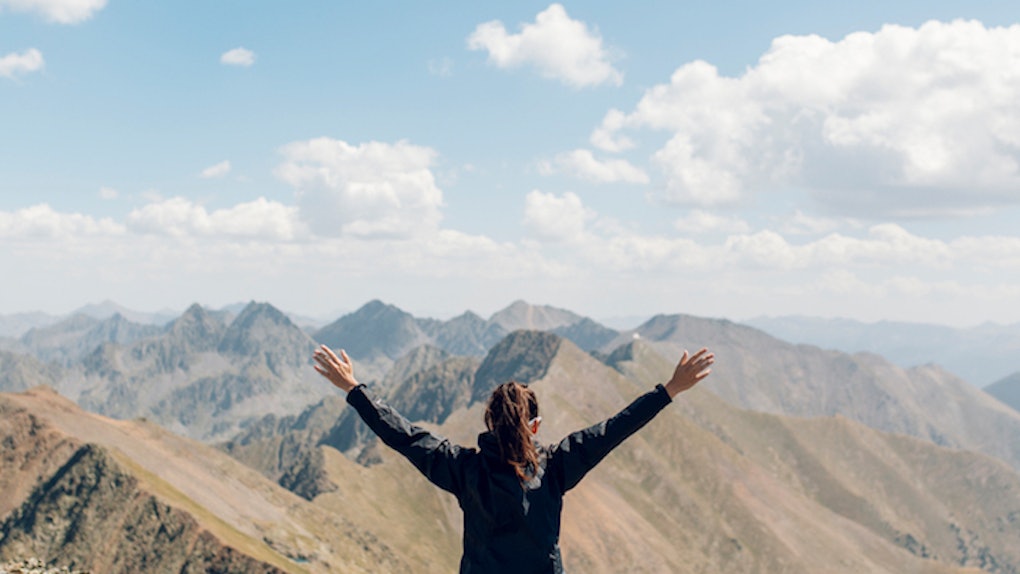 Being a teenager is one of the most awkward, uncomfortable and confusing times of your life. This, combined with an undiagnosed case of depression and anxiety, can create a whirlwind of emotions and even more uncertainty.

When I was 13-years-old I began to suffer from extreme depression, and thus began my journey of self-harm.

Many people, upon hearing the term “self-harm," associate it with various connotations regarding someone who's dangerous, scary or destructive.

I hate labels, and I don't think there are any labels that can characterize a person suffering from self-harming behaviors. It can literally be anyone.

As an eighth grader who silently strolled the halls of middle school wearing Nike high tops, Aéropostale t-shirts and American Eagle ripped skinny jeans, the realization by many that I was one of the many culprits of self-destruction was unthinkable.

I've tried many times to think back to the time when it first happened -- when my life took a turn for the worst. It was the fall of my last year in middle school, right after I turned 13.

I remember having a slew of emotions during a certain evening, and without thinking, or even realizing how I came up with the idea, I did it for the first time.

The behavior continued on an almost daily basis for years. I lost many friends and respect from others due to my self-harming acts. My skinny, pale arms became filled with light pink raises in the skin (it wasn't too serious yet) that prompted many questions and remarks from people in school.

“What happened to you?" “Do you hate your life?” “Are you emo?” The commentary only made everything worse and caused me to continue my behavior more frequently, and more extremely.

Middle school was a very difficult time in my life due to friendship drama, relationship drama and the overall difficulty of finding myself. In the summer leading up to high school I began to make sense of who I thought I was, which sparked some confidence, but things still weren't better.

My self-harming was surprisingly even worse than before. I discovered more destructive methods that left my skin looking ghastly. I went to the beach only a couple of times during that summer because I feared I was going to be judged for my injuries. When I did go, I covered myself up with shorts and a t-shirt.

My parents wouldn't let me go on an overnight trip to a lake with my cross country team after seeing how bad my scars and recent cuts were.

The light scrapes turned into deep gashes, the gashes turned into burns and my wardrobe slowly began to consist of only long-sleeved clothing to hide what I'd been doing.

Because of these events, I'm now a pro at wrapping gauze, matching foundation to skin color and covering up any discolorations and abnormalities on the skin. These aren't traits I'm proud of, but they were traits I had to learn to perform on a daily basis.

Self-harm made me lose friendships, it induced awkwardness amongst my peers (and strangers), it prevented me from doing indoor track during my senior year (my all-time favorite sport) and it caused a lot of distrust from my family members.

The way I remember a majority of my high school life is by remembering depression, anxiety and self-destruction. When I see photos from this time period I see the fake smile that masked my emotions and the subtle coverups of the marks on my body.

Meeting people for the first time prompted a quick handshake while holding my sleeves down with the tips of my fingers so that my arms wouldn't be exposed.

Being asked to go to someone's pool, to the beach or for a run meant either putting way too much waterproof coverup on, or making a good excuse up as to why I was dressed in layers mid-summer.

The preventative behaviors I endured just so that people wouldn't find out my secret meant that I missed out on a lot during my teenage years. Being a teenager is hard enough, but combining it with this fear, anxiety and terror that someone would judge me caused my worries to be more extreme than ever.

The excuses, white-lies and masks I would apply to my daily life shattered me in the end. By my senior year of high school, I didn't care anymore. I didn't want to be around anyone and I spent my time by myself, burrowed in my room, ignoring the outside world.

My grades dropped, as did the little amount of self-confidence and respect I had left. I had already confirmed my acceptance to Clark University, and felt the need to follow through with my goal to attend college after graduating.

Instead of having a positive first year experience, however, the destructive behaviors returned and I took all of my fear and anxiety out on my body.

My body, the temple that had been there for me all along, the foundation that had kept me standing through thick and thin, was being treated worse than ever.

My little sister's birthday is October 28 and it's a significant date for me. Not only is it her birthday, but it's the day I self-harmed for the last time. In 2015, after treating my body horribly for five years, I finally stopped.

I have grown from the person I was a year ago. Not only am I one year clean of self-harm, but I'm one year stronger. I treat my body with respect, as it is kind to me.

My legs allow me to hike trails, run miles and exercise. My arms allow me to carry things over my head, hold hands with others and write. My body allows me to live and to be me. I'm finally treating it like the friend it's been to me all along.

The majority of my scars are now masked with tattoos that remind me of the strength I've carried over the years.

Replacing my injuries with works of art has contributed to the acceptance I now have of my past, and body, that I've gained throughout time.

The first one, σωφροσύνη, translates to “sophrosyne,” and means a healthy state of mind and acceptance of yourself, resulting in true happiness.

The other is a branch adorned with a flower and leaves based off of a sketch by Van Gogh, my favorite artist, who's legacy has inspired me over the years.

“Other times, I look at my scars and see something else: A girl who was trying to cope with something horrible that she should never have had to live through at all. My scars show pain and suffering, but they also show my will to survive. They're part of my history that'll always be there.”