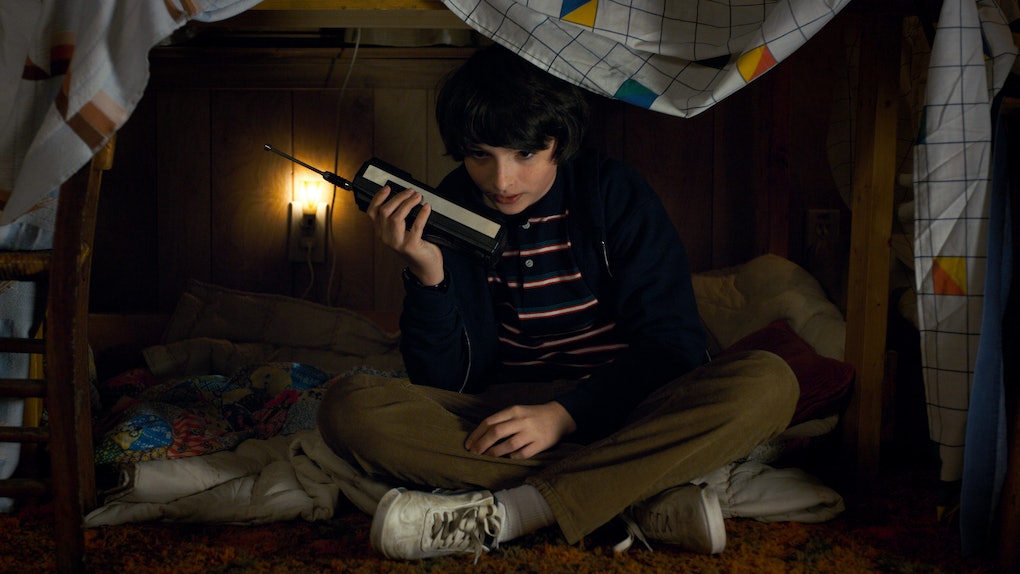 At the end of Stranger Things Season 2 episode 1, the show revealed that Eleven was alive and well and living... in Hopper's house, which was also not the trailer he lived in last season. As soon as the squeeing died down though, we realized just what a sad situation this was. Here was Eleven, a short bike ride away from Mike Wheeler, and he had no idea. Instead he was pining for her, terrified she's still lost in the Upside Down, and acting out at home over it. But we got even sadder once we realized this Stranger Things Season 2 Episode 1 easter egg showed just how badly things were going for Mike. Please be advised, this post contains spoilers for Stranger Things Season 2.

Like Will and Joyce's dubious reaction to a PTSD diagnosis, Mike's parents are also completely at a loss to explain why their son is acting out. All they can do is continue to punish him, in hopes that stripping him of his childhood toys will somehow both strip him of his childish behavior and help him "straighten up and fly right" by seeing that his actions have consequences.

This time, Mama Wheeler decides that Mike has to give up not one, but two, full boxes of toys as punishment for his continuing behavioral issues. But it's when he has to sit down and start dividing what goes and what stays when it gets really sad.

There are two toys we see Mike refuse to put in the box, even though he's supposed to be getting rid of his childish things. The first is the dinosaur. We met that toy back in Season 1, when Mike is giving Eleven her tour of the house. Like any 11-year-old boy, he starts showing off his favorite toys, including the Dinosaur, whose name is (adorably) Rory.

When Mike looks at Rory in the scene you can see him remembering that day with Eleven and showing off his prized possessions. He can't give away Rory, it means too much to him now.

One of the best scenes in the early going when the boys discover Eleven's super cool awesome powers is Dustin's response. Is he freaked out? Is he horrified? Does he consider the danger? No! He grabs the closest Star Wars toy, Han Solo's Millennium Falcon, and tries to get her to fly it.

Of course, Eleven isn't a monkey trained to perform tricks on command. (Well, actually she was, but to perform them for Dr. Brenner.) But even though Mike is like "Stop that!" and Dustin puts the Falcon model down, a few scenes later, when Eleven is by herself, bored at Mike's house, we find her making the Falcon fly after all. And she looks pretty amused by it.

Mike might not realize that Eleven actually flew this toy with her mind while he was off doing his school thing. But he does know that, once again, he can't put this toy in that box and give it away to some strange kid.

These memories of Eleven are all he has left until he gets to see her once more. And the tragic part is he has no idea where she is. He thinks he may have seen her out the window after the adventure was over. But he's not sure, and the soldiers didn't find her and capture her.

As far as he knows, Eleven is somewhere in the Upside Down, somewhere out there, and even though sometimes he's almost sure she's there, right next to him, or is certain he just heard her say his name, it never turns out to be real.

Tragically, he has no idea it is real. She's traveling through her mind to see him... he just can't see her in return.

More like this
In 'Riverdale' Season 5, Toni Topaz Is The Black Superwoman Without A Cape
By Erika Hardison
The 'A Million Little Things' Season 3, Episode 10 Promo Is So Disturbing
By Abby Monteil
These Movies & TV Shows Starring 'Shadow And Bone' Actors Are Far From Ravka
By Ani Bundel
Stay up to date