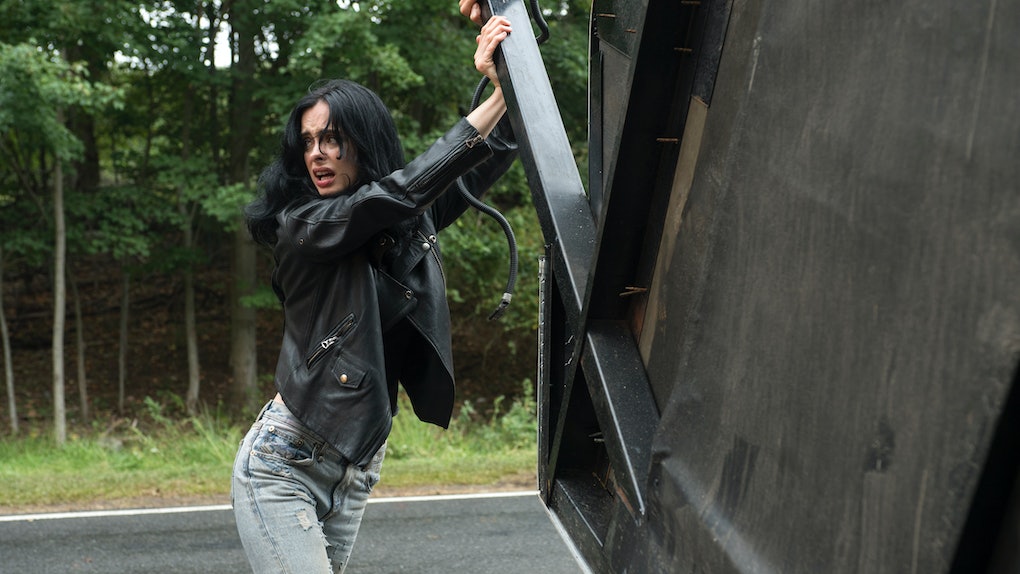 Is Whizzer In The ‘Jessica Jones’ Comics? This Season 2 Character TK

This season on Jessica Jones, Jessica is digging into a mystery greater than any she's ever tried to dive into before: Her own past. We don't know much about what made her, only that she was in a car accident with her family, her family died, and she came out the other side a powered person. But as she looks, more people like her are going to come out of the woodwork too, like Robert Coleman, aka "The Whizzer." Who is he? Is Whizzer in the Jessica Jones comics? And why is he important?

In the first episode of the season, we see that Jessica has a decent set of clientele going, enough business that she no longer has to work for Jeri Hogarth. We also know that since experiencing the events of The Defenders last summer, Trish, Jessica's adopted sister, has gone full "powered people conspiracy theorist" all the time, to the detriment of her ratings.

But the one-two punch of the two women's fame keeping their names in the news (even if Jessica really wishes hers wasn't, and that Trish would shut up already) means that Jessica's begun, without realizing it, to attract others of her kind to her office. The problem is figuring out which are the ones who are crazy enough to think they are, and who are really so powered it's driving them crazy. That's where "the Whizzer" comes in.

Who Is The Whizzer

In the comics, the Whizzer is actually an extremely old school character. He's right out of the Golden Age of the 1940s, in the 1941 USA Comics #1. His name is slightly different (Robert Frank), and he received his powers slightly differently too. He was bitten by a cobra during a trip to Africa, and healed with mongoose blood, giving him superspeed. During his 1940s comic run, he teamed up with Bucky Barnes to fight Red Skull and was part of a superhero team.

The Whizzer wad brought back a couple of time, once in the 1970s to work with the Avengers, and then again in more recent comics as a retired, aged superhero.

Jessica and Malcolm clearly think the Whizzer here is crazy, the wannabe powered, not the real deal. I mean, who keeps a mongoose as a pet right? (Such a great callback to his comic origins.) The moment fans see him start running and realize he really is that fast (though not quite Quicksilver fast*), we realize Jessica has misjudged... and it's too late for her to fix it because whatever it was that was trying to kill him just succeeded, and framed Jessica in the process.

(*We should note that later Jessica discovers Coleman was on 1200 mg of clozapine, an anti-psychotic that slows the body way down. Had he not been deeply drugged, the Whizzer might have given Quicksilver and run for his month, and Jessica Jones' budget a run for how much they can stretch it.)

It doesn't get much better when Jessica gets a hold of Robert's laptop after breaking into his apartment. She discovers he's been leaving messages in Trish's comment section and sending her video fan mail that might have clued Jessica in that he really was who he said he was.

Like her, he was in a life-threatening accident, one that could have killed him (and maybe actually did). He doesn't remember what happened after the accident, only that he woke up, and within a few weeks after leaving the hospital, the powers began.

This is exactly what happened to Jessica. Robert's accident was even car crashed based. Like her, he had no family who would care if he lived or died. But I suppose that's what happens if you're reintroduced to the Marvelverse straight from the 1940s.

More like this
These Tweets About Regé-Jean Page Leaving 'Bridgerton' Are Royal Bummers
By Cianna Garrison
In 'Riverdale' Season 5, Toni Topaz Is The Black Superwoman Without A Cape
By Erika Hardison
5 Facts About Courtney From 'The Circle' Season 2
By Dylan Kickham
Stay up to date