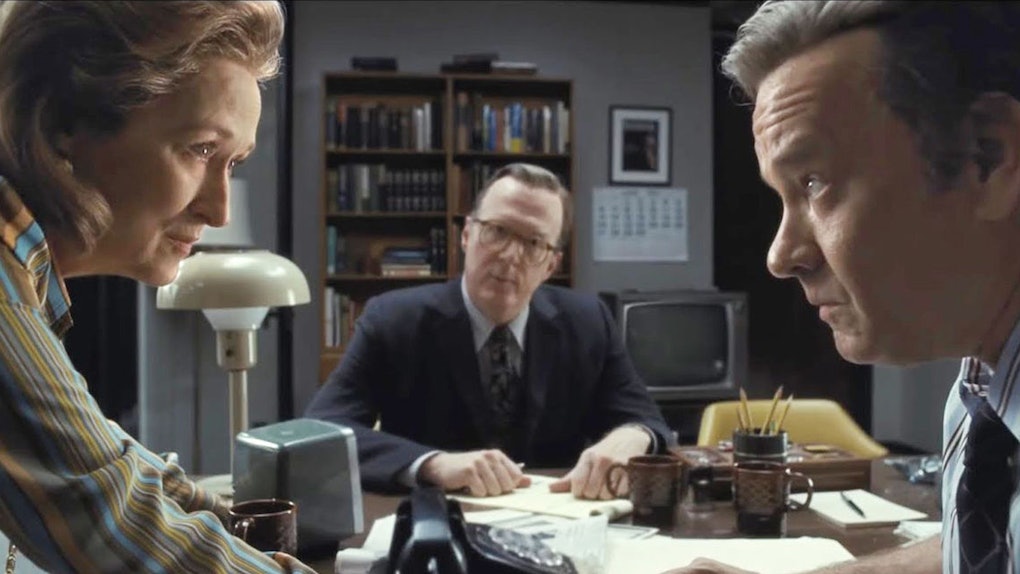 How True Is 'The Post'? The Hit Movie Is Based On Epic Real-Life Events

A long time ago, back when the world was still sane, the worst president of the last fifty years was undeniably Nixon. He was the first president to resign rather than serve out his term, brought down by the investigations of the free press we so highly value. Perhaps it's not surprising then that a movie made about some of those investigations is in the running for the Oscars in 2017, considering the climate. But how true is The Post to real life? How much of what we see is fictionalized?

This isn't the first time we've had a movie based on this era of journalism. The most famous is All The President's Men, which came out in 1976 not long after the events of Watergate. That film focuses on the breaking of the Watergate story, and the investigative journalist team of Woodward and Bernstein who accidentally took down a president. Though editor Ben Bradlee is also involved, Katherine Graham is basically erased from a film more concerned with focusing on the newsroom floor than what was going on in the boardrooms.

The Post aims to partially rectify this. Rather than retell the Watergate story, it focuses on The Washington Post's first big break during the Nixon years, prior to Watergate, when it decided to publish what were known as "The Pentagon Papers."

Here's the thing of it though: The Washington Post didn't decide to publish those papers first. There wasn't a lot of legwork done in the newsroom by intrepid reporters. Instead, that was all done by a different newspaper, The New York Times.

So, why was it such a big deal? Because the Nixon administration was suing the NYT over it. For The Washington Post to go ahead and publish all the papers was basically standing up to the administration. It let Nixon and company know that their lawyers didn't scare them, the First Amendment was on their side, and that there was a newspaper he should be worried about right in his own backyard.

Unlike All The President's Men, this isn't a mystery story, with reporters banging on doors and meeting cigarette-smoking men in garages with names like "Deep Throat." This is about the decisions made in boardrooms by those higher up in the company — those like Katherine Graham. The movie is actually partially based on, and very much inspired by, Graham's autobiography.

Liz Hannah, who wrote the screenplay, said reading Graham's account made her fall in love with the character. Talking to IndieWire, she said it wasn't meant to be a historical piece. It was "an unromantic love story” between Graham and Bradlee.

Or, as Streep put it: “It was a friendship that was so deep, it was like family.”

3. The Movie Was Going For What Feels True

This is a long way of saying that a film that is not going for historical accuracy isn't going to exactly land on it, except by accident. One of the first things to go: that it was the New York Times that published these papers first. It was the Times that was being sued over it by the Nixon administration, and it was the Times who won the 1971 Supreme Court case New York Times Co. v. United States, which ruled in favor of the newspaper's rights under the First Amendment. It's a ruling that may only become more important as the current administration wears on.

The Post mentions all this in passing. But unless you keep that fact front and center in your mind, it can quickly become an afterthought, lost in the Spielbergian rush to bend the arc of justice in the direction we all believe it should go, without taking the time to demonstrate how hard people jumped up and down to keep it that way.

That's not to say The Post is a bad movie. Streep's performance is stellar, as always. Tom Hanks is surprisingly believable as Ben Bradlee. The message is one that's important as we go forward... it's just not quite as historically accurate as one might wish.