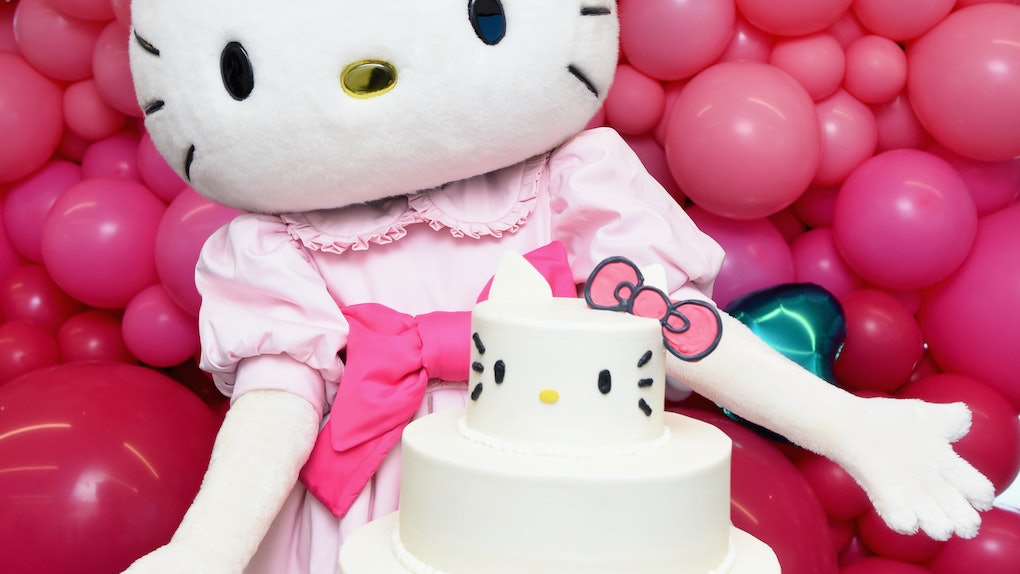 A 'Hello Kitty' Movie Is Officially Happening, Because We All Need More Cat Ears In Our Lives

After years and years as a cultural icon, Hello Kitty is finally saying "hello" to Hollywood. For the first time in her 45-year-long history, an English-language Hello Kitty movie is officially happening. It's been a longtime coming for the Japanese character, so you better start preparing for the cuteness overload now.

New Line Cinema and FlynnPictureCo will produce the newly announced movie, after an English-language Hello Kitty movie originally announced in 2015 failed to take off. This new project will mark the first time a Hello Kitty movie will be made outside of Japan. It's also the first time Sanrio, the company behind Hello Kitty, has allowed another studio to make a movie with the flagship character, or any of their other characters for that matter. Sanrio's lineup includes Gudetama the egg yolk and Aggretsuko the red panda, and there's a chance they might join Hello Kitty on the big screen.

I am extremely pleased that Hello Kitty and other popular Sanrio characters will be making their Hollywood debut. Hello Kitty has long been a symbol of friendship and we hope this film will only serve to grow that circle of friendship around the world.

Hello Kitty was first introduced in Japan in 1974 as a design on a coin purse. Within a year, the design spread to other countries, including the United States. Now, 45 years later, the brand appears on more than 50,000 products each year, from clothing to bandages to lunch boxes. She hasn't had an American movie yet, but there have been numerous Japanese movies, TV series, and books about the cute character. So why is Hello Kitty so popular? Anthrolpologist Christine R. Yano talked to the Los Angeles Times in 2014 about the success of the Hello Kitty character. She said:

Hello Kitty works and is successful partly because of the blankness of her design. People see the possibility of a range of expressions. You can give her a guitar, you can put her on stage, you can portray her as is. That blankness gives her an appeal to so many types of people.

There's no word yet on what the plot of the movie will be. But even though Hello Kitty has a "blankness," there's plenty of story to mine for the movie. According to Sanrio, Hello Kitty is a little girl (not a cat!) who lives outside of London with her mom, her dad, and her twin sister Mimmy. While Hello Kitty herself is not a cat, she has her own pet cat named Charmmy Kitty. So will the new Hello Kitty movie be a buddy comedy with the two twin sisters? An adventure where Hello Kitty needs to find her lost cat? Fans will find out soon, but in the meantime they're already getting excited about it on Twitter:

And some fans have already started sharing their guesses for what Hello Kitty might look like on the big screen:

Since the movie was just announced, it doesn't have a release date yet. But after waiting 45 years, fans are definitely ready for the movie to come out as soon as possible.