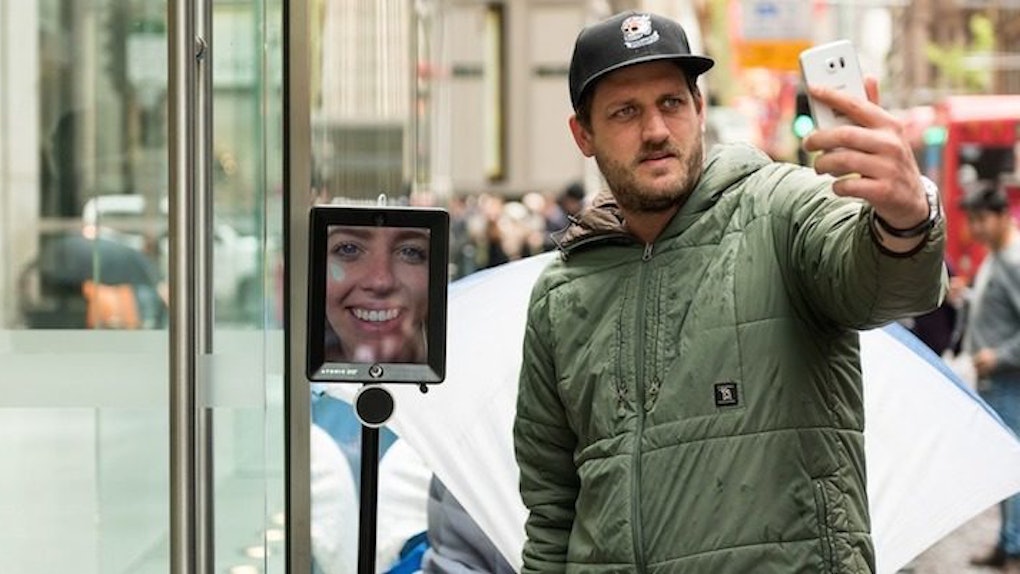 A robot waiting in line at an Australian Apple store for an iPhone may be oddly Zen, but it's also more probably a sign the robot apocalypse has truly begun.

Like many other people worldwide, Lucy Kelly was faced with a problem: She wanted to be one of the first people to snag the new iPhone 6s when it launches on Friday, but has dumb things like work and life responsibilities that keep her from waiting in line with the masses who seemingly have nothing but free time on their hands.

That's when Lucy remembered it was 2015, and in 2015, humans make robots do our boring stuff (like build our cars and watch our children).

Using a part-Segway/part-iPad hybrid she had lying around her office, Lucy has been waiting in line for an iPhone since this morning without physically being there.

A robot waiting in line to purchase another robot is the closest thing to robot cannibalism society has come up with.

Saving your spot in line with a "telepresence robot" is a thing now I guess http://t.co/SJzMsiMb8G pic.twitter.com/8EgspzYsLk — mark forscher (@garbnzgh) September 24, 2015

The robot, which she's named Lucy for some confusing reason, arrived on Thursday at 5 am in anticipation of the phone's Friday release date and currently sits fourth in line -- the person in front of the line, an entrepreneur named Lindsay Handmer, has been there for the last 17 days.

Lucy -- the woman, not the robot -- told Mashable she works for a media agency called Atomic 212 that built six of these robots to use in their offices.

We use them for everything, just to show new technology. It is a cool demonstration of what the future of technology will be. We are obsessed with them.

Kelly says she will wait in line one night, but she plans on trying to purchase the phone with the robo-Lucy, ensuring she doesn't need to deal with boring humans.

In case you're wondering, everyone behind the robot has been pretty OK with what Lucy is doing.

Everyone thinks it is pretty cool, they were happy to let a robot go ahead.

Australian people are nice. I'd be furious.

Citations: A robot named Lucy is lining up to get an iPhone 6S in Australia (Mashable)