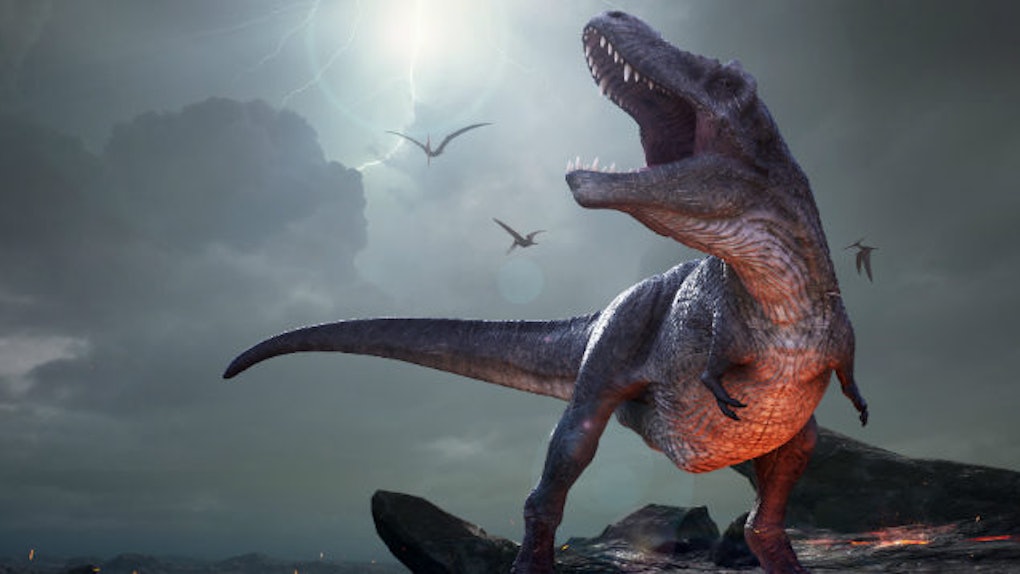 Dinosaurs Went Extinct Not Only From Asteroid Strike

When I was a kid, I wanted to be a velociraptor. Up until now, I've blamed an asteroid for ruining that dream of mine.

Well, it looks like there might have been some other reasons -- besides an asteroid strike -- why I don't have a dilophosaurus as a pet right now.

According to new research conducted by the Potsdam Institute for Climate Impact Research, tiny droplets of sulphuric acid formed in the Earth's atmosphere following the Roland Emmerich-esque cataclysm that ended the Cretaceous period 66 million years ago.

This resulted in a "big chill."

And when I say big chill, I don't mean to imply the dinosaurs all sat around and binge-watched Netflix.

No, I mean the Earth's average temperature went down by over 46 degrees Fahrenheit. And it took the environment 30 years to recover.

Not even T. rex could shovel his way out of that.

In the end, the dinosaurs, which were accustomed to much warmer climates, could not survive the drastic change to their environment.

What's even crazier is this animation of how the asteroid that struck Chicxulub, Mexico would have forced the surface of the Earth to undulate like a liquid.

Within roughly three minutes after impact, the asteroid would have caused the Earth to rise to roughly 9 miles high where the asteroid had struck.

That's nearly twice the height of the Himalayas.

The sulphuric acid droplets actually blocked out the sun for years and marine life perished after the oceans mixed together.

Just like mixing alcohol, if you mix oceans... your hangover is going to be lethal.

It's clear the asteroid was not the only factor for extinction. However, it definitely set forth a chain reaction of environmental changes that the dinosaurs could not recover from.

Citations: Is this how the dinosaurs REALLY died out? Researchers reconstruct the dark and frozen conditions on Earth after asteroid megastrike (DailyMail.com)