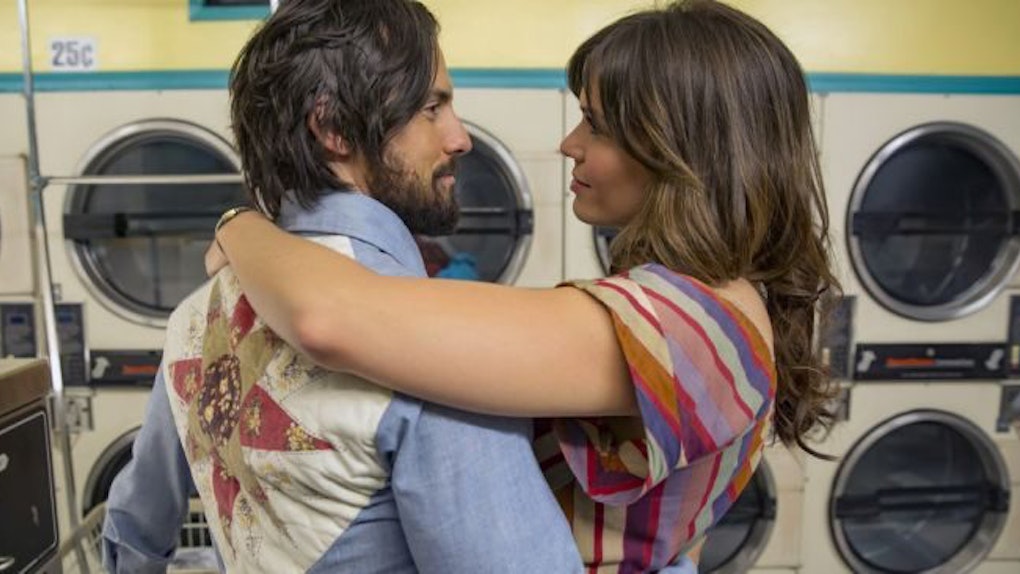 What Started The Fire On 'This Is Us'? Theory Claims It Could Be The Washing Machine

The This Is Us premiere handed us a huge clue about the night of Jack's death -- it was the same night the Pearson family home burnt down. But while everyone has speculated if the house burning down killed Jack, the question of "how did the house fire start?" has fallen to the wayside. As one of my very favorite detectives Lord Peter Wimsey once said "When you know how, you know who." So how did it happen? What started the fire on This Is Us?

According to one theory on Reddit, the fire will have nothing directly to do with the random clues of the scene: The cast, Randall's girl, the dog, the jersey, or unburnt things. Instead, it will be due to the small choices people make in life. Speaking to Entertainment Weekly this week, creator Dan Fogelman said the following:

I've always been fascinated by [the fact that] you could have met your husband or your wife if you had just not gone that way at the bar that night, or the friend hadn't wanted to set you up.

As reddit sees it, then we should look at all the small clues and choices people are making... like the ones concerning The Best Washing Machine In The Whole World.

So let's talk about some of the things that we know about the washing machine that Jack bought for Rebecca after their original one broke. Such as... it lives in the basement.

Who else lived in the basement by their 17th birthday? Kevin. At the end of that episode, we see him yelling for his mom that the washing machine (his brand new roommate, now that he and Randall are no longer sharing) is "possessed." AKA: It's acting up. Rebecca says she's going to have it fixed.

But is she really? Do you fix the washing machine when the crap in your family hits the fan? Especially if you're trying to resurrect a singing career, at the same time your husband's drinking problem becomes so large he can't hide it anymore? Maybe the washing machine seemed after a couple of rounds to get better. Maybe the noise became tolerable. Maybe Kevin was told to hush his complaints, after all, Dad has just moved back in, and we're working on his sobriety right now as a family.

Not long after we saw the washing machine episode, we also learn the house was at a decent price because the previous owners thought it was a money pit. That means all the baseline HGTV problems are possible: plumbing, electrical, HVAC, gas. What if the intermittent problem with the washer is... electrical?

Ok, fine, so maybe the washing machine caught fire. But how does that tie in with all the other clues? This is where the redditor has a brainwave:

Kevin moved to the basement, where the washing machine is located, to get away from Randall. But as we see in the premiere, Kevin had a cast at the time of Jack's death. Kevin most likely could not make it up and down the basement stairs on crutches with a full leg cast. There are three bedrooms in the house: Kevin moved out of the room he shared with Randall, and we know they are not getting along, so it is unlikely he would move back in to this room. It is also unlikely that Randall, who asked Kevin to come back, would willingly move down to the basemen and give Kevin the bedroom. This leaves Kate. Kate witnessed the fight at the football game and is aware of the tension between Kevin and Randall, Kate and Kevin have a close bond, and it would be consistent with her character to offer up her room willingly. Plus, as we see in the premiere, Randall and Kevin both have girlfriends, meaning they would likely want privacy. This puts Kate, who claims to have caused Jack's death, in the room with the malfunctioning washing machine.

The only thing we're missing here is the dog. But if the dog is given to Jack by Rebecca in lieu of a fourth child (as we discussed yesterday) and Kate bonds with it, because it's daddy's dog and she's daddy's girl... and Daddy ran into the house to the basement to save her, and never came out...

Maybe? Either way, Dan Fogelman promises we'll find out all the answers by Season 2's end.