After Kendrick Lamar dropped his single "Humble," social media lit up with an intense discussion about whether it was appropriate for rappers to portray themselves as deities.

But after watching the video, listening to the lyrics and comparing the two together, I came to realize that the reason rappers like Kanye West and Kendrick Lamar compare themselves to God is way different than you'd think.

In their comparison, these rappers are being vulnerable about their personal struggles with religion and faith, and putting that struggle into music.

Kanye West is one of the most pivotal people in the industry when it comes to struggling with faith.

If you're a diehard, "chop up the beats Kanye" fan, you can't help but yell, "God show me the way, because the Devil's tryin' to break me down." So when Yeezus came out, it was a hard pill to swallow.

When Kanye raps, "I am a God/Even though I'm a man of God, my whole life in the hands of God/So y'all better quit playing with God," the ear is immediately trained to hear Kanye say "I am God" and nothing else.

In listening to to "Ultralight Beam" and "FML" on The Life of Pablo, it's obvious the fans were what put Kanye on this unattainable pedestal.

As subscribers, we invest so much in these artists that we fail to realize they are not Gods. They are people. Their lives may be more extravagant, but at the end of the day, they still experience pain, loss, sorrow, depression, anxiety and the need for reassurance.

Throughout Kanye's body of work, we see his life represented in his music. On his song "Through the Wire," which was written two weeks after he was involved in a car crash, he said "I must gotta angel, 'cause look how death missed his ass."

We saw Kanye's emotional vulnerability even before he dropped the album 808s and Heartbreak.

During the 2008 Grammy Awards, Kanye changed up a set of the lyrics of "Hey Mama" to honor his mother, rapping, "Last night I saw you in my dreams, now I can't wait to go to sleep. And this life, this Grammys, is all a dream... and my real life starts when I go to sleep."

What makes Kanye such a compelling artist is not his ability to be brazen on records and flaunt his cockiness -- even though it does inspire us. His greatest pieces of work are truly when he lets his guard down and discusses his experiences in a way that makes people feel their pain, suffering and battles with loss are valid.

This is so apparent on The Life of Pablo. Take "Ultralight Beam" for example. The song resonates with so many of us because of the persecution we feel, no matter your faith or background. That is something that we have all felt in one point of our lives. 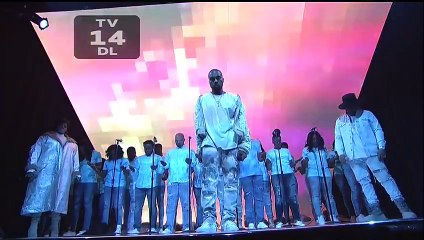 Chance the Rapper's whole section on "Ultralight Beam" is breathtaking because he lays it all out on the line.

When he raps "I'mma make sure that they go where they can't go/If they don't wanna ride I'mma still give them raincoats/Know what God said when he made the first rainbow," it brings you right back to Kanye's faith early on in his career when he dropped "Jesus Walks."

Kanye acknowledges his struggles with fame, anxiety and the effects of his visual madness on "FML." Kanye states "I been thinking/About my vision/Revealing the layers to my soul." Kanye acknowledges that if he remains steady on his path and sure in his vision, nothing can shake him from the course -- even himself.

By putting rappers on these pedestals of perfection, we hold them accountable to a likeness that really is only attainable by God.

We judge them when their demons come through their lyrics and we persecute them when they put their lives in their music, even though they are just revealing the layers to their souls.

What we fail to realize is these artists should be allowed to make mistakes, struggle with their religion, question God and reach out for His guidance just like we do. Who are we to judge?

Just like The Bible verse states, "Whoever is without sin among you, let him cast the first stone at her."